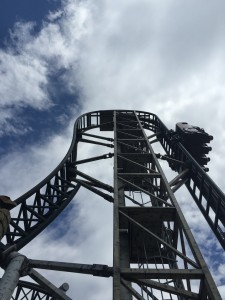 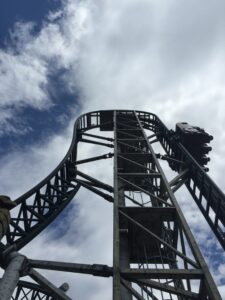 Last week I played hookie with my two sons. We’d been planning it all week, so technically that might disqualify us from the official “hookie” category – you know the one that feels deliciously deviant, boldly spontaneous and wildly out of the ordinary. But still, we called it hookie.

Our destination? Canobie Lake Park, an old school amusement park in New Hampshire that has some new tricks up its sleeve. I’m pretty sure the last time I was there I was a hungover teenager blowing off some steam from the stressful “work” of being a counselor at an overnight camp.

My boys, ages 8 and 12, hatched their plan of attack all week, measuring themselves to make sure my littlest would qualify for the “real” rides, printing out a map of the park, plotting out the best strategies to hit all the rides, and feverishly consulting YouTube videos and reading reviews of the park.

Friday morning, we packed up some sandwiches, piled into the car loaded for bear and feeling fully equipped to tackle any challenge thrown our way.

You know where this is going, right?

One look on my eldest son when we walked into the park told me there was one thing we couldn’t prepare for enough: FEAR. 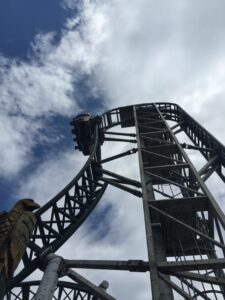 And there it was – Untamed -the hat-hanger of a ride the park boasted about on its website and glossy brochure. It was all gleaming white steel, rising up to create a stark and cold menacing profile against a blue sky. The three of us stared straight up at it, hearing the screams of terror raining down upon us from the eight brave souls who were being carried on their way up – straight up – to uncertain doom. We watched, entranced, as the faces of those eight terrified people gradually came into view, and then faced us directly as they plummeted back down to earth, and then whizzed by on their way to make a full loop.

When it passed us and there was a lull in the action, both of my sons looked at me. I’m fairly certain I was grinning manically, having grown up at Great Adventure in New Jersey and realizing my kids were finally at the age where we could hit the big league rides. In my mind, I was planning road trips to all the big parks I knew.

“I think we’re going to need some courage. Let’s go get a slushy” my eldest son said.

As much as we had planned for this trip, studied the rides, and rallied ourselves senseless, nothing could truly prepare us for the actual fear of getting in line for this ride.

Watching my sons sip their hideously red and neon green slushies, it occurred to me: you can’t logically reason with fear. Especially while you stand safely on the ground looking at it outside yourself. You’ll just go nowhere and stay put. Transfixed. You have to feel fear and let it move through you, like the thunderstorm we would see move through the sky later that day in the park.

Which is not to say that our thoughts can’t create  – or compound – our fears. They can. But if we want to move beyond the fear? It’s gotta be felt.

And that’s what my eldest son decided by the time he got to the bottom of his slushy. He stood up and said in an official-like tone “let’s go”, and we marched ourselves over to get in line.

“The hardest part is just getting in the line” I heard myself say to him.

What a crock of shit that was coming from me at that moment in time, and I knew it. Just days before I had received my manuscript back from my editor, having waited for its return to my wringing hands since I sent it to her in mid-April. So conceivably, I had been standing in the fucking “line” since deciding to write this book last summer (give or take ten years…), and it wasn’t getting any easier. It was, in fact, getting harder. I wasn’t feeling any less fear. I was actually feeling even more afraid. And why?

Because shit’s getting real.

That phrase is a favorite of my friend Kate, and as a published author herself, she knows only too well the hot coals I have walked over to get to this point of having a finished manuscript. 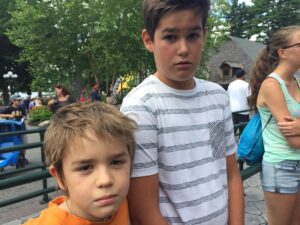 And that is exactly the look I saw on my eldest son’s face when we took our “before” picture as we were standing in line. He wasn’t feeling any less fear. It was growing bigger with every step closer to our turn to get on Untamed.

But we stayed in line, moving up little by little, getting closer and closer to the pathetically small cage we would be strapped into with five other strangers. And why?

As we made it to the front of the line and we strapped ourselves in and pulled down on the heavy shoulder bars, I thought of how scared I was to do the final edits and release my book in the world. To release me into the world in a much bigger and more public way. I thought of how vulnerable I felt and how grossly unprepared I was to deal with whatever might come my way. And what was that exactly? I didn’t know, but as I sat there strapped in that cage, it felt like it would be bad.

So bad I could die.

And then we were moving, gliding around the final corner in front of the sympathetic and worried eyes of the line members we had once been. Allies who also said yes to the near-death experience. Fellow fear-feelers. Our cage tilted back ninety degrees and suddenly we were on our backs, looking straight up at the sky, with only a glimpse of the rails appearing just over our toes. I started screaming- chanting, really – at the top of my lungs:

I thought back to all those questions I hadn’t been able to eloquently (or even adequately) answer: “So what’s your book about?” And how my mouth had this habit of popping open with a look of confusion and almost-pain passing over my face, before I snapped my mouth shut again. I was becoming a venus fly trap, snapping myself shut on the unsuspecting fingers of the curious. Beating myself up for missing yet another opportunity to speak about my book in any form or fashion.

That experience happened to me earlier in the week, when the woman who will be writing in my office during my August break came by to get the key. A writer herself, she was curious to hear about my book and where I was in the process. Again, I did it. Open, sign, snap shut. The words bound up in me, constipated by the fear I wasn’t fully feeling. Fear I was trying to think my way through. Fear I was trying to negotiate with, discount, or even 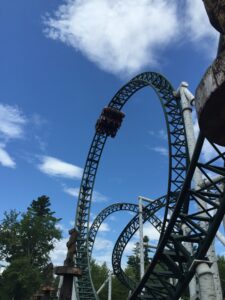 I’ll never forget what this woman writer said to me when she saw my mouth snap shut that day. She looked at me with these kind eyes and said, as only one writer can to another: “The words will come. They will. You won’t always be here.” And she was right. They will come – and had come. It was the fear I was wresting with and resisting, not the words. And she knew it. Because she had been there. In the line.

On that day we got Untamed, and conquered our fear of that roller coaster, I thought back on how the hardest part was the build up, the anticipation, the slllllloooowwww moving time just before the sudden drop of action. The release from the top was easy compared to the climbing up. We surrendered at the top and conceded the fight to gravity, but we fought tooth and nail on the way up. Even as we were strapped in and ready.

And that’s all natural. It’s part of the process and ultimately didn’t get in the way of our ride. 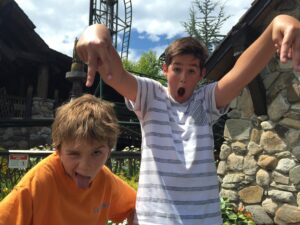 After our first (of many) ride on Untamed, we took an “after” picture and talked about the difference we saw. We talked about the joy we felt at having surmounted – and survived! – our fear. We strutted around, chests puffed out with pride, knowing we were one of the brave people – you know, the untamed people. We even bought stickers with bear claw slashes on them to show that we were, in fact, the real deal.

As I head out for the month of August, I will be spending the first two weeks finalizing the edits to my book, and the second two weeks hanging out with my family on vacation. The second part comes naturally to me. But riding Untamed helped me to see how I want to ride through the first part – the book part.

I want to focus my sights more on how the after-party will feel, like it did with my boys after our first ride. I want to say out loud  BRAVE!BRAVE!BRAVE! whenever I feel like I’m rising to new heights and scared shitless I might fall to my death. I want to look up to the sky and see how close I am to the top of the rails. So very close. Just a moment away from the exhale and the release that comes with surrendering to gravity.

But most of all I want to remember the other people in the line with me. The ones that have gone on this ride before and the ones that will go after me. The writers who have written books and have had the courage to cast them out in the world for others to read. The client of mine who is following the calling of her art to the outer reaches of what even she imagined. The woman who called me today from the corporate conference room, and said through her tears, “I’m calling you because I know in my bones it’s time to leave but I have no idea what comes next.” There are so many of us in the line, and yet its so easy to forget – and to feel alone.

The ride? Untamed. My book? Unscripted: A Woman’s Living Prayer.

They’re not that different. And as I said to the boys that day in the park, “I’ve never met a ride I wouldn’t try at least once.”

I want my brave to be that big.

So this month, as I make my edits, I’ll be feeling my fear. And I’ll also telling myself to “say what you want to say, and let the words fall out…honestly.” I’ll be back in September and hope to post my own “after” picture here as well as announce the release date of my book this fall. I am so ready for the after-parties to begin.