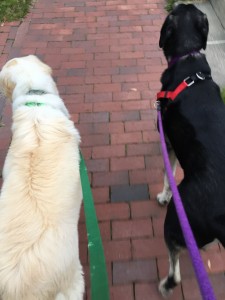 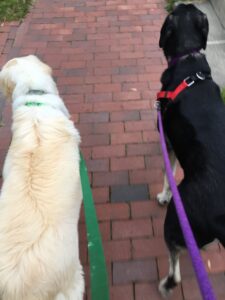 Earlier this week I felt like crying. Truth be told, it wasn’t just a moment of feeling – it was actually two entire days of wanting to cry. The sky was crying on both of these days, with intermittent rain and clouds that were gray and swollen with precipitation wanting to fall to the ground.

But me? I wasn’t allowed to rain.

Because I had all these good reasons not to. As I moved through those two days, feeling heavy with precipitation, I had this long list of excuses running through my head, an endless litany of justifications that were seeking to staunch the welling up of emotion in me like a tourniquet stops the flow of blood.

You have nothing to be sad about.
Crying doesn’t solve anything.
You just need to get busy.
This makes no sense.
You shouldn’t feel this way.
There’s no reason for this.

Except there was. My feelings apparently were my “reason” for feeling this way. And with them came a deep and insistent desire to honor them.

Except I didn’t. I marched on. Swollen.

And that is how I came to find myself crying openly at the end of my street later that night, in plain view of the rush hour traffic on one of the most heavily traveled roads in Maine. I didn’t mean to – obviously I had been working hard to avoid this very thing all day – but I credit my eventual downpour that night to an unsuspecting eleven-year old kid in our neighborhood. He was the one that finally got me to blow through my reasons.

I had taken the dogs for a walk that evening – my dog, Max, plus a friend’s dog, Zoe, who happened to be spending the day with us. Max and Zoe are the best of friends, having spend many happy hours chewing on opposite ends of the same stick, and passing a slobbered tennis ball from one mouth to another. They are in love. So, naturally, they were thrilled at the chance to spend an evening together walking through our neighborhood. I’ve never walked two large dogs together at the same time before, and was a little nervous about their leashes getting tangled up, but it turns out they were happy enough to just walk side by side – one male water dog, sleek and black, and one female herding dog, fluffy and white. As I walked behind them, I marveled at how they completed each other – one land-loving, one water-loving, her white to his black, his sleek to her fluffy, her insistent bark falling into his constant silence. They were like Jerry McGuire “you complete me” dogs, each complimenting the other to make a whole. No wonder they were friends.

All was going well on our walk that night until I was about to round the corner to our quiet street. That’s when I heard them.

I stopped in my tracks when the first strains of their unmistakably discordant music reached my ears, feeling that all-too-familiar lump in my throat build. The one I get right before I cry. Because bagpipes always make me cry. Always. They make me think of my grandfather and our family’s Scottish heritage. They make me think of my name and its ancient Gaelic roots. They make me think of weddings and funerals and people gathering for somber and celebratory occasions. The sound of bagpipes have always transported me back in time, having me feel connected to myself and the earth in a way that is both primal and sacred. Because the sound of bagpipes just makes me feel – whether I want to or not.

So of course, upon hearing them, I quietly started to cry. 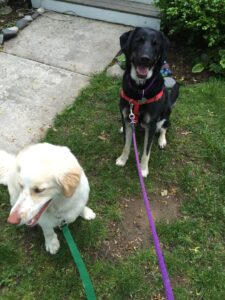 I stopped with the two dogs, and turned to watch the eleven year-old classmate of my son’s march around this triangle patch of grass in the small park located at the end of our street. I can only assume he was practicing for the upcoming Old Port Festival parade coming up this weekend, but in that moment, it felt like he was part of a divine intervention for me. I could see him glance at me from a distance, as if trying to determine if he was, in fact, the reason I had stopped. He seemed a bit uncomfortable in that moment – probably because of the tears streaming down my face – but he simply marched on, practicing while his parents sat on a nearby bench. It was then that I remembered what I had known all along.

As I stood at the end of our street that night, I cursed those bagpipes for blowing my cover, and at the same time was so very grateful to them. Because their presence – that ancient music that seems to speak to my soul – got me out of my head and into my body. It quieted my tired brain and opened my heavy heart. It had me feel instead of decide, and yield instead of negotiate.

And with that opening, I was finally able to allow my tears to fall for so many things my mind had not been able to wrap its brain around. I cried tears for Sheryl Sandberg and the husband that died in an instant, even before she could say goodbye. I cried for the children she had to hold each night when all she wanted to do was to be held herself. I cried for the empty side of her bed, and how my own bed had felt so empty just the weekend before when my husband was gone a motorcycle trip. I cried for how frail and fleeting life feels sometimes, and the unbelievable courage it takes to love someone despite that fact. And then other sensations flowed out of my heart – the sadness at having my son go away for camp for the first time in his young life and the exhaustion of being brave and trying not to worry; the despair for the family member who drinks too much and doesn’t quite know how to stop;  the angst and doubt about having written an entire book with my whole heart and wondering if it will have been worth it.

I wasn’t a slobbering mess on this walk, quite the contrary – my tears were falling, but all the fight had gone out of me. They were flowing freely, and with every tear, something in me opened, released, and sighed with relief. In hindsight, I think I took solace on that walk, knowing that somewhere else in the world, there was probably a woman doing the same thing – letting her body talk to her.

I know this because I hear similar versions of this same story from women every day.

I work with a client who instructed me to have her “ask her body” whenever she says she doesn’t know what to do, or is overwhelmed, or scared, or confused.

“My body always knows,” she says. And it does. Every time.

Another client’s eyes well up when we touch upon a particular phrase, without fully understanding why. So we pause, and wait for the understanding to flow from the feeling, like words from the tears.

One woman tells me to look for her tears and get curious about them, because she believes, “there is always truth in my tears.”

The reality is, I can try to lie to myself – to cajole, convince, persuade, reason, or even bully myself to believe something contrary to what I’m feeling – but my body will eventually rat me out. Especially when there are bagpipes around.

It’s like having a built in lie detector with me at all times. 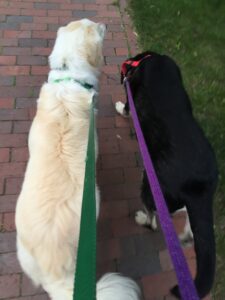 But walking with the dogs that day, Max and Zoe, I made another connection for myself. I looked down at them, walking side by side so happily, and was struck by how they were a metaphor for me “walking” with the feminine (Zoe) and masculine (Max) energy in myself. I laughed at the fact that Max was actually the only dog that I “owned”, because clearly I am much more at home with the masculine energy in myself. But the feminine? Not so much. Zoe, a visitor to our neighborhood, had been barking up a racket all afternoon, letting herself be known to me and anyone else who was within earshot. Zoe, like the feminine in me, it seems, was not to be ignored.

What I learned through the process of writing my book, is that I tend to lie most to myself when I’m craving my feminine energy, but am resisting accessing it. I tell myself little paper-cut lies like, it doesn’t matter, I’m over-reacting, I’m too sensitive, I’m out of control and losing it, or I have no reason to feel the way I feel.

The truth of the matter is that I don’t need a reason to feel, I just need a body. And thanks to Max and Zoey, I was using mine that day walking outside, breathing in the natural world, and hearing the bagpipes. My body knew my truth. My body was what was holding the leashes that day with the dogs.

And as I looked down at those two dogs walking side by side on the leashes I was holding in my hands, I started to get a glimpse at how it might look to have my masculine and feminine energies be integrated to make up the whole of me, walking together with me in the same general direction – happily, even, with no tangled leashes or tugging.

So that’s what I’m playing with now, trying to own the feminine energy in me more fully, and integrating it more happily with my familiar masculine energy, like two dogs walking down the same sidewalk – with Zoe as my muse and the bagpipes as my soundtrack.