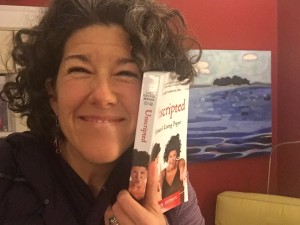 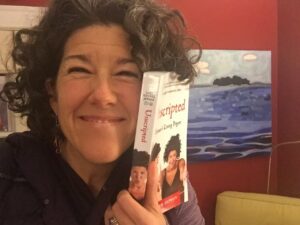 Last week I needed a lifeline. I got one (thankfully) when I reached out to a good friend. Here’s what was going on:

My book, Unscripted: A Woman’s Living Prayer, finally came out on Amazon on December 30th, just getting in under the wire before a new year started.

I say “finally”, because it felt like I had worked and waited an eternity for that moment. I had talked about it, written about it, and eventually grew disenchanted with the whole stale topic, thinking (on my worst days) that the day I was waiting for (“It’s OUT!!!”) would never come. I know in the larger scheme of things that sounds like a gross exaggeration and, admittedly, it is. Books often take years to be born. But I wasn’t operating in the larger scheme last year – I was in my scheme. The one where it felt like an eternity.

But on that sweet night of December 30th, when the last approval had been submitted, the last switch had been thrown, and all the proper fields of information had been filled out, I let out a huge whoop of delight and did a little dance around my house to celebrate.

Elated and prancing about, I told my 13-year-old son that getting that book out of me was an even bigger relief than when his 10 pound body finally slid out of me after six hours of pushing. He kind of winced, mortified, no doubt, by that graphic image, but my whole body broke into a wide grin at that comparison. Because it remembered that sensation and agreed. My body knew what I was talking about.

I was thrilled. Proud. Relieved. And completely and utterly exhausted.

I felt my whole body exhale, as if I had been holding my breath for 16 months and hadn’t realized it. My shoulders started to detach from my earlobes, and the winced-pinched expression on my face started to smooth out a bit, I’m quite sure. Suddenly, there was a taste of sweetness, as if honey and dark chocolate had replaced the lemon and vinegar taste I’d been so used to in my mouth.

But it was also still the holiday season and the beginning of a new year, so there were lots of fresh starts, shiny new intentions and family rituals that bedazzled the turning of the year in our house and my business, like sparkling diamonds glistening on the freshly fallen snow outside. 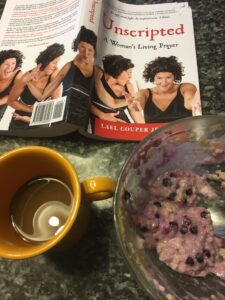 Texts and emails started to roll in from my friends and clients who had already bought – and were loving – the book I had written. People were posting pictures of my book on Facebook with their babies, mugs of tea and happy, smiling faces next to it.

Smart, accomplished, competent, and discerning women I admired, trusted and respected reached out to thank me for writing what I wrote – telling me that my words and stories had them deep in thought, laughing and crying as they resonated with my experience as a woman, feeling both validated and inspired. One woman even said she was feeling more loving toward herself, which made me weep in gratitude. 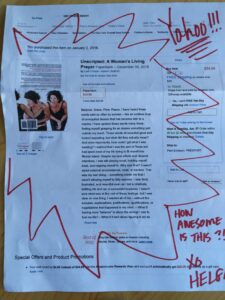 Have you ever had one of those moments? When the massive project was completed and met with rave reviews? When the huge event went off without a hitch? When you finally fulfilled the classes and got the degree? When the thing that had consumed you for so long was now behind you – and all that remained was to put away the chairs, sweep up the confetti and turn off the lights on your way out?

Then you know. You know the elation and the deep sense of accomplishment and profound gratitude. You know the huge exhale and the intense feeling of relief, satisfaction, and pride of an effort that was met with success.

And perhaps you might know the void that follows.

Years ago, after the birth of my rather large first baby mentioned above, I went to get a massage. I had gone to this particular woman throughout the entire course of my pregnancy – from the “I think I might be expecting” early days to the “I can’t breathe there’s no room” overdue days – so she had witnessed my body and its changes for a year. On this first massage post-partum, I was feeling a bit tender and lost without that singularity of purpose in my belly – but I didn’t know it then. 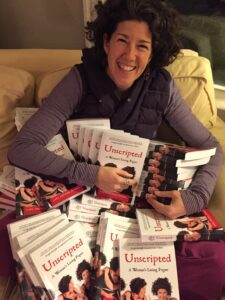 All I knew is that I was bone tired, a bit dazed by what had just happened in my body, and stunned by the vast unknown that lay ahead of me. I was also weepy. Very, very, very weepy.

The kind and serene masseuse lay her hands on me, noting that this was the first time in a long time that I was flat on my back. She suggested we might begin with my stomach, seeing that was the source of much activity over the past 10 months. As she put her hands on my belly, which felt mushy and poochy with extra skin, she made a sad face and said,

“Oh… it feels so empty in there now.”

At which point, I burst into sobs. She didn’t know the potency of what she had said – she was young and had not grown a child in her body yet. But her words – raw and uncensored as they were – helped me to name exactly what I was feeling: Grief.

The empty spot in me where something beautiful had been growing. 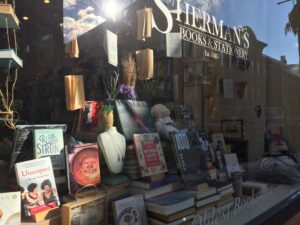 traveling about these past three or four weeks since my book was released. The grief for the book that had been my primary focus, my key bearing, and my constant traveling companion for over a year. The sweetness of knowing something beautiful – something I gave life to from inside my body – is now living on its own outside me. And the sadness at having that empty womb – the spot in me that was created by its birth.

It’s a lot to wrap your brain around.

How do you hold so much gratitude and joy, while also holding a sense of loss? Perhaps you know. Perhaps you’ve been there at the very place I have been standing. Perhaps you know, then, how very easy it is to just get busy.

And that’s exactly what I tried to do in those weeks after the holidays faded and we all got back to the grind of our work weeks and usual routines. I thought* I gave myself some latitude (*thought being the operative word there…) in those first few post-partum weeks, telling myself to be gentle and savor and take my sweet time.

But inside? Inside was a fucking street fight that was getting ugly. A battle between sweet and sour was being waged, and blood was about to be shed.

Marching orders were coming in fast and furious over my wires, like the tick-tick-tick of a Morse Code machine – loud, urgent, and almost indecipherable.

I had responses and answers to all of those commands (“No”, “I don’t want to”, “I don’t feel like it”, “Not now.”), but apparently they weren’t the right ones because the marching orders got louder and just started barking at me in shouty caps. Relentlessly. 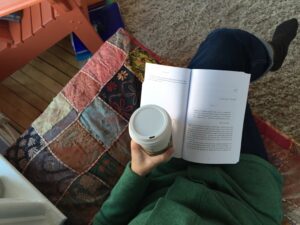 My body was giving me such clear messages, but they weren’t jiving with my head. My head was insisting I overrule those messages, but as I started to rest and play and relax more into the expanse of this post-partum time, my body was just feeling so damn good I didn’t want to budge. Even in the face of some really loud voices telling me I was wrong.

And that is why I needed a lifeline.

I called my friend, a published author herself who, ironically, is now post partum from a baby of the human sort, who has been there, done that, and had come out the other side of it. I told her how I was feeling right and wrong at the same time.

And like the masseuse did that day 13 years ago, my friend gave me the words that helped me touch the empty spot that was actually still very much full inside me.

It was empty from the book that had been living inside me, sure, but now that same spot was quite full from receiving gratitude after its birth.

“The key is digestion. You’re full. Even unacknowledged good stuff will turn to shit if it’s not digested.”

She went on to tell me how “a book is forever” –  a phrase that felt like luscious balm on my soul – and how there was no timeline that needed to be followed, no prescribed steps that needed to be taken. In fact, in a surprising twist, she said she was actually watching me in how I was going about the release of this book, saying that “non-launch launches” are actually the new thing right now (who knew?)

Once I heard this from my friend – the one I trusted, my lifeline for this particular topic – I started to see signs everywhere I looked that were reinforcing that same message. My acupuncturist whom I hadn’t seen in two years felt my pulse and said that my body was incredibly low on resources – specifically my “fluid…which is the home of the feminine energy in you.” I ran out to the car one morning late to work and my car battery had died. My iphone went on the fritz not responding to any of my touches and then just stopped all together. A handful of clients rescheduled, leaving my week feeling expansive and deliciously open.

It was all so clear now. So why did it have to be such a knock-down-drag-out-fight to get me to see that?

I suspect it has something to do with my relationship to “empty spaces”, the void of the unknown, or more specifically, grief. Like a cat in an open room, I freaked out a little with all that openness.

It’s also easier and often preferable to listen to the noise of busy instead of the quiet of empty – I know this from my own experience.

But I also know what’s waiting for me on the other side of that listening:

So now that I’ve got all that sorted out in my tired brain, the fight in me has remarkably dissipated. I’ve tuned into the quiet urgings inside me, am hot on its trail and am eager to lay hands on it with love.

Thankfully, I’m in good hands. It seems I always was. I just needed a lifeline to point it out.