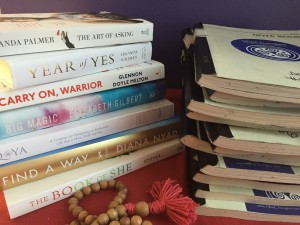 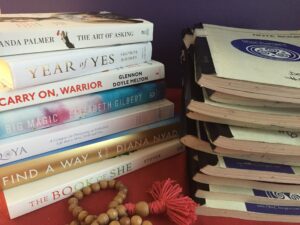 I’ve been reading like crazy these days. I usually have a couple of books going at a time — one fiction and one non-fiction.

But lately I’ve been all about the non-fiction. It began in with Red, Hot & Holy by Sera Beak and The Year of Yes by Shonda Rhimes, and then really kicked up a notch with Find A Way by Diana Nyad.

It was that last one — the extreme dream adventure of swimming from Cuba to Key West — where I realized I was no longer just sipping, but was actually chugging something from this book other than the words.

I found myself physically mourning Diana Nyad’s book when it was over, desperately trying to pick some other meat off the sucked bones by streaming interviews and documentaries about her epic tale over YouTube. I was transfixed.

Admittedly, so was most of America, and indeed the world, as they watched this 64 year old woman finally succeed in swimming the most badass stretch of open water in the world. 110 miles. 54 hours. No shark cage. A raging gulf stream that made every stroke forward nearly impossible. Flotillas of fatal box jelly fish. And here’s the clincher: four previous (and very public) failed attempts at the same route, losing team members, sponsors, money, coverage and faith along the way.

What I marveled at most about this woman’s story is that it her quest was so extreme in nature, but the way in which she went about it was so measured and deliberately paced. She set her sights on doing something almost everyone thought impossible — especially at her age and with all those horrible conditions and circumstances working against her — but did so with a cadence that was steady and sure.

It’s like she knew the rhythm of her efforts would ultimately be the key to her success. Even as she failed.

I’ll never forget her telling the story of how she managed to stay sane and motivated during all those long hours of sensory deprivation when it was just the pitch black water blending with the pitch black skies, miles from seeing any lights on shore, with only the sound of her labored breathing and exhausted heartbeat to keep her company. She developed an internal playlist that helped her match her stroke to the rhythm of 85 songs she had committed to memory (“Busted flat in Baton Rouge… waitin’ for a train…and I’s feelin’ as faded as my jeans…”) And when she got to the end of each song (“…La da, la da, la da, la da, la da, la da, la da, la Hey, hey, hey, Bobby McGhee, yeah!”), she’d say to herself “ONE!” And sing it 999 more times. She had it down to a science,  so that when she got to a count of 1000, she knew she would have swum 9 hours and 45 min. Exactly.

She knew it was about the rhythm of the inhale and the exhale.

In and out. And in and out. In equal measure, time and time again. Her quest was extreme, and Diana and her team never knew what new obstacle, danger or unanticipated variable would arrive, but her breathing remained constant.

She knew her breath was the only thing out there she could control in that crazy ass environment, so she designed her entire mission around its rhythm. She synced everything on that historical crossing to match it. Time and time again, until she finally arrived at the other shore.

I’ve been thinking a lot about my own breath — and how I work with (or against) it.

But it wasn’t until I stumbled upon a quote in Glennon Doyle Melton’s book Carry on Warrior that it clicked into focus for me, right there in black and white:

“Reading is my inhale and writing is my exhale”

My whole body moaned a yyyeeeeesssss of recognition. Validation flooded my body.

Much like Diana Nyad and her internal playlist that held the beat for her, I felt like I was starting to stumble on a framework that could hold the beat for me in my creative life — breathing in, and breathing out, reading in, and writing out — in a more rhythmic fashion. I had the realization that while my exhales have been big and long and powerful blows, the inhales have felt like little sips from a coffee straw. 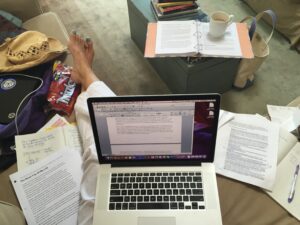 Next week will mark the one year anniversary that I delivered the first draft of my manuscript to my editor for my book. EXHALE. Which represented an intense creative effort in the nine months prior to that to get it out of me. EXHALE. And marked what would be the beginning of a six month process of revision and editing after that. EXHALE. And then it was finally published and released on Amazon. EXHALE.

I tried to exhale. [nothing]. So I waited a minute and tried again. [nothing]. For the life of me I could. not. exhale.

It became really clear to me the degree — and the depth — to which I needed to inhale. My sips were no longer cutting it after so many long and hard exhales. And moreover, I didn’t want them to cut it anymore. I was kind of done sipping. Something in me had shifted.

What I’ve come to appreciate is that my relationship to inhaling is essentially about my relationship to the feminine, and how often and well I nourish myself and that energy. Self-care doesn’t even begin to describe it for me. It’s so much more than that, encompassing a whole host of other things like permission, receiving, slowness, solitude, dreaming, listening, reflection, questioning, and feeling.

After enough false starts with myself to exhale during the first quarter of this year, I finally gave up trying to rally and muster and jostle myself into any specific gear, and decided instead to take my sweet time inhaling as a means to offset the series of exhales I did over the last year and half of writing my book. This has been both hard and delicious.

Perhaps she’s onto something. She did, after all, manage to swim 54 hours in shark and jellyfish-infested waters. 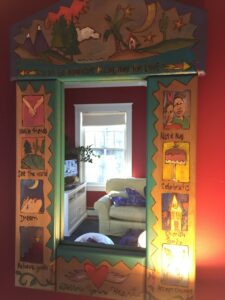 here is a framed mirror in our home that has given me a clue as to how this might look for me. It was a wedding present from my parents nearly 20 years ago. Honestly, we’ve had it for so long, I’d almost forgotten what it said. But the other day, as Diana’s song played in an endless loop in my head, I found myself walking over to it to look at it more closely. At the top it reads: “Go out for adventure, come home for love.”

I imagine I’d be free to make it to just about any damn shore I set my sights on.  Just like Diana did.

“Freedom’s just another word for nothing left to lose…nothing don’t mean nothing, honey if it ain’t free..”