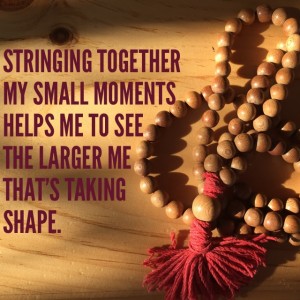 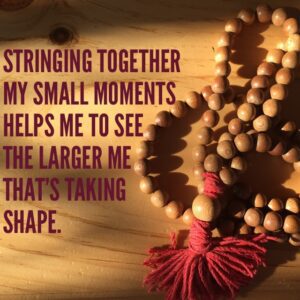 I recently listened to a podcast where Seth Godin was being interviewed about being a writer. I heard him say something that made my whole body vibrate with resonance. When asked to describe his work in the world, he responded: “I notice things for a living…and I try very hard to be aware of my narrative.”

Happy sigh. I do too, Seth.

I notice things constantly. But more to the point, I also connect those things to other things and, like those colorful little plastic beads my sons used to play with as toddlers, snap them together to form larger chains – of ideas, patterns or themes.

That’s a fantastic thing on the days I’m seeing clients because they have hired me to do just that — to see them as they are and as they want to be, listen to what they’re saying and what’s left unsaid between the words, and feel for the alignment or the discord between what they say they want and how they are saying it.

Notice them. All good stuff. Love it. I’m on it.

But when I’m not focussing that energy on clients? When I’m a writer who isn’t writing? It can honestly be a bit much. I find it hard to turn off – and truth be told, I don’t really want stop that flow of noticing, even when I’m full up. Like Seth, it’s kind of what I do.

I find myself taking snapshots, collecting soundbites and writing complete essays and blog posts in my head as I’m walking, driving, making dinner, or doing some other benign everyday activity. Sometimes it comes so fast and furious it’s like drinking from a fire hose, and all I want to do is run to the nearest pad of paper and grab a pen so I can write it down.

What is it with me and writing things down?

When will I stop being surprised by my natural inclination to reach for a pen and paper to make sense of my life and our world? It’s what writer’s do, right?

“I don’t know what I think until I write it down.” – Joan Didion

I am in the process of reading Elizabeth Gilbert’s newest book Big Magic, and I was thrilled to hear she included that story she told on stage in her now famous TED talk on Creative Genius. As the story goes, when American poet Ruth Stone was young and working in the fields of rural Virginia, she would often hear a poem coming to her like a galloping horse. Whenever this happened, she would throw down whatever she was working with at the time, and high-tail it to the house where she kept a piece of paper and a pencil at the ready. If she could get to the paper before the poem got to her, she could capture it. If not, it would pass her by. Elizabeth Gilbert used this story to illustrate how creative genius finds us – how it’s always looking for a willing and able host to hang out with so it can deliver the goods.

I absolutely love to be a host to that creative energy. There are days I simply swoon with delight because I feel so certain I was meant to leap up and catch these creative things as they are floating by us in the universe. But sometimes I feel like I take in more visitors than I have beds. Sometimes I feel like everywhere I look there is a juicy idea, a provocative thought, a quirky notion or concept that wants some alone time.

So instead of taking in stray cats or collecting beanie babies with their tags still on, I gather up ideas — stories, mostly. I suppose you could call it hoarding — especially when I’m so full and overwhelmed by them I stop writing. The challenge for me is that I don’t keep these stories in a drafty old barn or a large rubbermaid container in the attic. I keep them in my head. Which is Lael-sized. 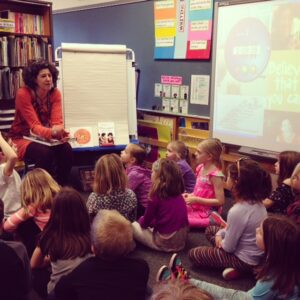 It used to be a bit overwhelming until a wonderful group of unassuming first graders got me to think about the whole thing a bit differently. Here’s what happened.

Back in February, I was invited to speak to a class about being “a real live author”. I had just released my book in late December, so the teacher was hoping I could talk to them about what my process of writing the book was like as well the topic of creativity in general. In preparation for me to come in, she shared that the class had been playing with “small moments” or “seed stories” as perfect bite-sized pieces of story that could start a writer writing.

My jaw dropped when I read that concept, because it perfectly summed up the way my first book was formed — it was a direct result of me continually stringing my ideas, stories and insights together, like small moment beads on a necklace. Until it connected into a circle.

And formed a book.

I swear that was the day that I spit and shook with the universe and raised my hand (“Pick me! Pretty please pick me!”) to write another book. Because since that day — when the lightbulb when on about how I created something from nothing just by playing with small moments — ideas have been coming to me fast and furious again. I have scraps of paper by my bed, scribbled napkins in my car, and barely legible notes in the margins of my books.

Those kids showed me the way out of overwhelm – one small moment at a time. They helped me to see how I went about writing a book. They shined a light on the fact that I am actually in the process of writing one right now.

One brave student boldly ventured a suggestion to me at the end of our time that sealed the deal for me. She suggested that “maybe your time with us today could be part of your next book?”

Because I’m about to unleash a whole string of small moments on this blog of mine that are living inside me, hoping (trusting, knowing) that sooner or later they will form another circle.