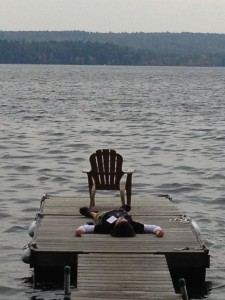 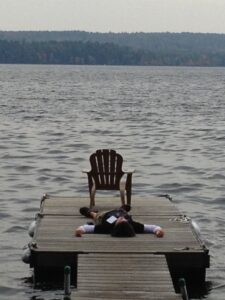 I’ve been playing around with the idea of our stories as a source – and how the things we tell ourselves ABOUT ourselves can guide us…but only up to a point. My most recent thought about this is that around mid-life, our stories start to run out of gas…we reach the end of the line with them and they start to give us diminishing returns.

When you think about it, the stories we collect and share are really just evidence of the beliefs we hold dear. They serve to reinforce themselves time and time again each time we share them. Until they run out of gas and sputter out.

One such belief of mine is “I’m a fighter”.

I’ve long cherished this belief about myself, and have countless stories I could tell – of my childhood and having been completely deaf for nearly a year before anyone realized it…  living with my mom as she navigated a drawn-out and nasty divorce…being a division one runner…to being a woman working in the corporate world – that would serve as evidence to reinforce that belief of me being a fighter. Scrappy. Resourceful. Resilient. Fierce. Strong.

Earlier this year, my eldest son and I got totally sucked into the Divergent book series. The book is based on a dystopian society, where at the age of 16 you have to make a choice to identify with one of five factions – each one valuing a particular quality. We both flew through the books, knowing the movie was coming out soon, and were eager to compare notes. We both wanted to know which faction WE would have chosen for ourselves.

In my mind, it was a clear cut choice for me – a no-brainer, plain as the noise on my face. I would have chosen the Dauntless faction. This was the faction that valued courage above all else. They were the warriors of the society, totally badass – physically capable, mentally strong, fiercely loyal.

But I didn’t say any of this, I just asked my son to guess my faction. He looked at me thoughtfully, and said, “I’m thinking you’d either be Amity (which valued Harmony) or Abnegation (which valued selflessness)”. My jaw dropped. Images flashed through my mind from my life, and I felt ridiculously close to having an identity crisis.

How could my son not see me more clearly? How could he not get that my most treasured quality is courage?

After all, this was the SAME son, who when he was six on our vacation at a lake house accidentally knocked over a steel davit– one of those big hooks that held boats away from the docks – in such a way that it actually fell down on top of him, pinning the skinniest part of him to the ground. Had it not been for a railroad tie by his feet that acted like a fulcrum displacing some of the weight, he would have been crushed.  I heard his screams and came running outside. Without hesitation, I lifted up the davit and told him to drag himself out from under it, which he did. He was rattled, as were we, and we went to the ER to make sure he had no internal damage. “How much did that davit weigh?”, I heard the Doctor ask my husband. “About 500 lbs, the same weight as my motorcycle.” My jaw dropped. I had heard about mothers lifting cars off their children, but I honestly didn’t believe it. It hadn’t felt that heavy, but try as I might later that night, I could NOT lift that davit one inch off the ground.

Surely that act alone, would qualify me for the Dauntless faction.

In many ways, that’s who I am. I rally, I rise, I respond to the call, ready for action. Ready to fight, if need be. So as I listened to my son that day, I could feel myself DIGGING in. HOLDING ON.

Around this same time, I was reading the Desire Map and trying to solidify my five words that best described how I wanted to feel in life.  I put DAUNTLESS right at the top of my list. Other words followed like POTENT and RESOURCEFUL and SHINING. I wrote them on a pink sticky and posted them in my office.

And then the strangest thing happened. I noticed that every time I saw them, I felt exhausted. Drained. Uninspired. I sighed a lot when I looked at them. They depleted me just hanging out on a stickie, let alone considering putting them into action.

I told one of my friends, “It’s like all the fight has gone out of me.”

What I’ve come to appreciate through the convergence of a bunch of other events since that day, it that my masculine energy in me – the fighter in me – has been tapped one too many times. Depleted. It’s simply not working for me like it used to. It’s a story that has told itself out, making way for a new story to emerge – one where The Feminine energy in me is the main character. Which, to be quite honest, is a completely foreign concept to me.

When I went to an energy worker earlier this year, she said, “Hmph. Your entire body – especially your lymphatic system (the fluids that house your emotion and spirit) is stuck in fight mode. And fight is just another form of protection. Which means your body is afraid….and has been for many, many lifetimes. It seems it’s all you’ve ever known.” Oh. So I asked her what she thought I should do.

“Do? There is no doing here. Only feeling. And being. Everything right now needs to flow from your heart, not your head.”

Shit. Then I asked, “For how long?” And she just smiled.

Yielding as means of sourcing my Feminine energy. It’s all about opening, receiving, allowing, and feeling my way as I go. Allowing myself to feel vulnerability as I’ve never felt it before. No fighting, no rising up, nothing to protect. Just some fresh new stories to live.

The preceding was a transcript from a portion of my own story I shared on stage at SheSpeaks, my evening of storytelling held 5.8.14. This particular segment was used to set the stage and segue to Erin Oldham, the fourth storyteller of that evening.