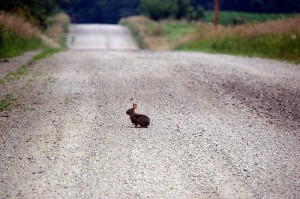 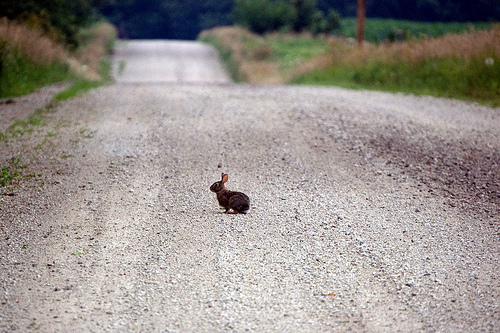 When I was in grad school, we were asked to share with the circle of thirty students in our cohort what animal best represented ourselves as a leader. Not surprisingly, as we went around this circle of bright and ambitious working-professional students, there were many fierce and classically top-of-the-food-chain animals offered up: hawk, eagle, falcon, wolf, bear, lion. I started to sweat a little because I knew what my answer would be.

I can still hear the laughter and feel the condescending smirks that came my way in the moment, now twelve years in my past. If I’m not quick enough to catch it, I can still go to shame. Vulnerability inevitably sneaks in under my radar.

Once the snickers subsided, someone was bold enough to comment, “Oh, you’re road kill.”

I gasped and threw up in my mouth a little at the violence suggested in that comment and how it was a metaphor for my experience in this not-so-safe group and, truth be told, being a woman working in the corporate world.

Small. Cute. Ultimately dispensable. A dime a dozen. And easily run over.

I knew I had just done something either incredibly stupid or thoroughly brave in outing myself as a rabbit. A case could be made for both, but that moment – as benign as it seemingly was – I sensed I was at an important crossroads, one that would define and irrevocably alter my course: tell the truth and honor who you are or play the game and stay safe.

I’d like to say that what flowed from that moment was a rich dialogue punctuated by curiosity. It wasn’t. No questions were asked about the virtues of the rabbit (nimble, perceptive, intuitive, creative, fast) with regard to leadership or its symbolism (feminine power, lunar energy, fertility, shape-shifting gender).

I’d like to say I offered up my experience that day as a means to explore how the over-developed masculine energy contained in the group (which incidentally was comprised of primarily women) literally ran over and was, yet again, dismissing, discounting and discrediting any feminine energy contained with us. But I didn’t. I shut the fuck up.

And silently made a note to buy a copy of Watership Down on my way home that night for some much-needed validation.

And there it was. Once again I found myself shying away from yet another opportunity to give voice and value to a feminine approach to leadership. I conceded to the violence implied in the “road kill” comment, and silently wished I had aligned with a Falcon with its sharp talons and beak that could impale a rodent. I might as well have been the driver that made road-kill of my own rabbit, in that I allowed it to die a silent and shameful death while on my watch.

It wouldn’t have been the first time. Rabbits tended to die around me.

I grew up in the country, and it was pretty common to have our old flatulent beagle, Polly, bring a near-dead rabbit to our back porch as twilight approached. So common, in fact, that my sister and I had a standard protocol for this event, lining a shoe-box with a towel, putting the bunny with the punctured head in it to rest, feeding it throughout the night with a dropper, and then inevitably burying it in the morning, giving it the next available number in a long-line of “Thumpers” that came before it. I thought nothing of it at the time, how we brought quiet grace and loving reverence to the never-ending parade of half-dead rabbits in our life.

And then there was the time I tried to repeatedly run over a rabbit I had accidentally swiped while driving on a back-country road in my 20s. Far from a masochistic move, mine was an act of compassion. Or at least an attempt at that. The rabbit I had maimed with my car might beg to differ, as I repeatedly tried to run it over to put it out of its misery, missing it again and again with the skinny tires of my Tercel, sobbing “I’m so sorry!” before backing up and trying one more time. It was awful, and I believe to this day that poor rabbit actually died of a heart attack from terror, rather than its initial injury from my car.

But it wasn’t until I started consulting with an Executive Director at a local women’s organization here in Maine that I reclaimed my rabbit.

Because she was a chicken.

Accomplished, resourceful, scrappy and wickedly bright, this woman readily identified and proudly owned her chicken as her totem animal for leadership. She inspired me. So much so, she made me rethink – and ultimately reclaim – my association with the rabbit. We used to joke – and still do – about taking “chicken and rabbit” road-trips to create some badass positive change in the world. Implied in this joint Thelma and Louise adventure (minus the unfortunate cliff scene), was a fierce and wildly audacious commitment to making change happen, fueled by nothing more than own intuition, wisdom, and irreverent belief that a chicken and a rabbit could make a difference.

I’m official done with running over my rabbit. No more.

Now, at the age of forty-five, I’ve finally grown weary of the shame, the hiding, the back-peddling and hokey-pokey dance I’ve been doing with The Feminine all my life, qualifying and diminishing it with my humor, making it “cute”, comfortable or somehow soft.

No longer that younger version of myself who sat quietly in the shame of that circle, this is what I believe now:

Being vulnerable does not make you road-kill. It makes you visible, and therefore strong.

Being smaller in size (or number) does not make you less of a force for change.

Bringing compassion and curiosity to conversations is a fierce and strategic maneuver.

Sometimes two people is all it takes to create a critical mass.

Once you lose something dear, and then find it again, it’s yours forever.

So there it is, my lost and found story of The Feminine that began and ended with a rabbit.