Do you have a minute? (sure you do.) Do you wanna play? (it’s okay if you’ve forgotten how…) You’re not alone.

This TED talk by Shonda Rhimes has just moved into the top slot of my all-time favorite TEDs (sorry Liz and Brene…). I think I held my breath the whole time I watched it just now…she just spoke so directly to my soul, I didn’t want any ambient noise to distract me. Even my own. Her bottomline (which I assure you is not a spoiler…) is this:

There was one particular part of her TED talk that pinged something in my core. She was talking about how “The Hum” she consistently had been getting from her work in the world — a self-proclaimed “Titan” writing and producing three to four award-winning television shows simultaneously season after season — had simply gone away.

The Hum she likened to “God’s whisper right in my ear” — the very thing that kept her feeling fulfilled, fueled and inspired; the very thing she had come to attach her identity and worth to — wasn’t there for her anymore. It just stopped. And was replaced by silence.

She’s quick to admit that outwardly nothing appeared to have changed (“all the colors were the same”) — she still showed up, wrote, produced and assumed the role of Titan. But on the inside? It was a different story.

She feared her Hum was broken — like its engine had died.

The work didn’t change, but the nourishment she derived from it did. And now she was starved for her Hum, but not knowing where or how to get it from any place other than work. She missed it so much she started to wonder: “Who am I without the Hum”…or even more to the point: “What am I without the Hum”?

And then she said it. That phrase that made something cold inside me start to melt just a little, like the girl from Frozen Shonda references that finally let go of whatever the thing she needed to let go of:

“In the homelessness of my humlessness, I have nothing to do but pay attention.”

I was dumbstruck by that phrase. Slack-jawed with the resonance of what it touched within myself:

My worry about where my Hum has gone.

Because something in me has shifted in me since I wrote and released my book. At times it’s exciting (yay: intrigue, curiosity, shiny new toy), and other days it’s completely terrifying (holy shit: panic, fear, bracing for impact).

It’s still hard for me to put words to it, but I sense the shift when I am aware of how much time and space and silence I seem to be requiring these days. This need of mine appears to have grown exponentially over the last year, and I’m a bit intimidated by it.

—How do I honor that need and still run a profitable business?
—What if I’m becoming lazy or worse…selfish?
—What is happening to me?

I suspect it has something to do with the pinky swear I made to myself last year. I wrote about this experience as “giving birth to consent” in my book — it was the moment I made a sacred promise to honor the feminine energy that lives within me; to never again turn my back on her. So long as we both shall live.

We even got hitched — a ceremony, vows, a ring (I thought a moonstone was a nice touch…) — and made it all official.

Here’s what I know about my relationship to the feminine and what it will ask of me thanks to the work of Marion Woodman:

“The feminine can’t be understood, it can only be experienced as presence.”

So not to put too sharp a point on it, but apparently I can’t think, strategize or muscle my way through this one. I have to yield, open, create space, and listen.

It’s about Play for me. As in the verb.

Which, to be honest, I have resisted. I get that now, but it’s been a process to see the degree to which I have tightly managed that desire. I remember not too long ago on one particular toothy phone call with my editor, I instructed her to yank the chapter entitled “Simply Play” from my book because we had hit a snarly editorial knot. I even joked with my husband that my new favorite phrase was “just fucking delete it.”

But a second after I’d offed Play and relegated it to the cutting room floor, I caught myself and said: “Hold on…I think that’s what I’ve been doing my entire life…” And then I fought for it to stay in.

And now? I’m doing my damnedest to live it. The SPACE (not my ability, mind you, but my intention) I hold for Play in my life has become the essence of the “living prayer” I talk about in my book.

I’ve realized that “work” isn’t work for me at all — it’s easy. It comes naturally and is sanctioned, supported, and publicly celebrated in our society. But “play”…ah that is where I need to stay awake and alert. THAT is what I need to actively nourish.

And in case it’s not patently obvious — which it might not be if you haven’t read my book yet… — “work” is how my masculine energy shows up in the world in all its glory. It has a robust appetite and I am extremely skilled at feeding it. “Play”, on the other hand, is how my feminine energy is expressed, and like many of us…I’m still on training wheels when it comes to its feeding schedule. But I’m in it for the long-haul and I’m hellbent on learning how to ride this bike on my own. With both of my wheels —work and play, masculine and feminine — moving me forward.

The feminine is about being present to myself. Period.

That realization is all well and good, but in a very similar vein to Shonda’s story, things started to get wonky right after that spit and shake with the feminine in me. For instance, my internal world started to demand to be fed much more than it has in the past. It’s no longer satisfied with the little licks of nourishment I had doled out to it on the sampler-sized ice cream spoons in the past.

The feminine in me wanted more than just a little lick.

And after what I considered a good feeding — a handful of days off to play hooky, unplugging, a more gentle schedule, lower expectations, permission to push things off — my appetite for it didn’t wane, it actually grew.

Which in one regard was a good sign, right? The feminine in me was getting stronger, more comfortable, and confident in the solidity of our relationship. But on the other hand, it begged the question of its capacity to eat…would it ever leave me alone? Would it ever be full?

The answer to that, I know, is yes.

But in the meantime it’s uncomfortable and weird and slightly terrifying to trust myself — and my instincts around nourishment — to this extent.

I bump up against selfish, and privilege, and shame daily as I invest in my relationship to the feminine in me. 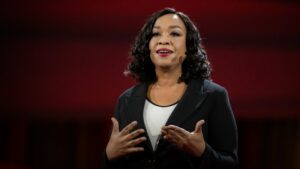 But I want to talk about it with you here (among other places), because I firmly believe this is the way I will live my prayer out loud. I want to be that brave. Like Shonda is.

So thank you, Shonda Rhimes. Thank you for telling your story so that I don’t feel so alone. Or crazy. Or both.

You’ve inspired me to keep going on this path.

And to keep saying yes to Play.