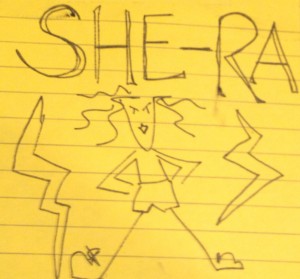 This is the final post in my series of three this week, and it’s probably the most intriguingly obtuse of them all (even I don’t yet fully understand what it means, and this is ME I’m writing about…) So if you have any insights, I’d love to hear them!

For those of you just joining this series, it was inspired by me taking a serious dose of my own medicine. I am participating in a pilot group for my women’s writing experience, designed to take the questions for a spin and see if they hold water (they do). The result is I have been completely backed into a corner by my own writing, and have found the words that flow out of my pen are both comical and electrically charged. I am gaining clarity and a renewed sense of purpose with each word I write.

Here’s how the process works: each week of In Her Words has a theme, and participants are asked  to select one of three questions and write their thoughts on it from three different perspectives: a journal entry, a letter, and a story. The theme I was writing about this week was “Daring.”

If you’d like to read the series in the order it was written to get the full impact, you can check out my journal entry and my letter before reading the story below. It’ll also offer some context for the whole bad-ass, naked, and cake references in the series…

Without further ado, here is my story:

The woman was clearly comfortable in her own skin. Why else would she be naked on the deck of the boat among all the other tourists? She might as well have been alone, for all the attention she paid to the crowd that summer day. She was obvious to them, and that oblivion served as a guide – instructions if you will – to the others to just ignore her nakedness.

No one told the captain or reported her to the harbor master. They just accepted her, neither averting their eyes, nor opening staring at her. She had created a new normal without ever uttering a word. And now she was simply part of the crowd, accepted in the face of all odds.

As the boat pulled out of the harbor, the woman kept her eyes trained on the horizon, in her own world. She seemed to be looking for something, but not in a frantic or desperate way. Just a steady one. She must have blinked, given the brightness of the sun, but it was almost imperceptible, that movement.

As the day wore on, the woman reached for a fishing pole. Without shifting her gaze, she cast her line out and affixed the pole into the bracket on the deck. Then she got another one, cast, and did the same. And again, until there were many poles at work, their translucent lines disappearing into the water behind them.

She continued to stare out at the horizon, this time a small smile playing on her lips.

And then it began. The marlins started jumping, making big arcs in the blue sky and falling back down to the water amidst explosions of sea spray. It was exciting and scary to watch. The fish were massive and the lines were pulled taut. But still they held. It was almost like a choreographed act from one of those sea parks in Florida, except there were no trainers in the water with whistles. And the marlins looked frantic, not tame.

Well, there you have it. The end of the series. I can feel it in my own body, having written these…there is clearly something shifting, making space for something new to enter. It’s one of the rare moments in life when you literally feel yourself changing, as you are changing.

I’m still churning through my thoughts on all this. But I’m certain of one thing:

There is a bad-ass cake in my future…and I most likely will be eating it naked. Without a fork.