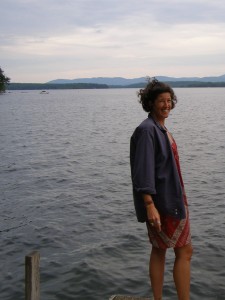 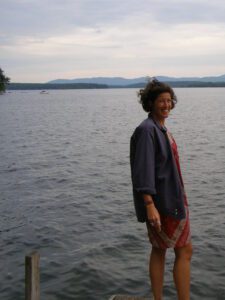 The halo effect from August is still very much with me. I just keep thinking about what a gift that month was to my psyche and my body. It’s still giving to me.

In many ways, I feel like I swam my way through this past August. Literally. I was in the water every chance I could get, loving the sensation of pulling and pushing my body through the water. I had fish envy.

As a water sign, I get power from all things water – tears, lakes, even rain – so this isn’t  any new revelation for me. But this summer it felt even more powerful.

Maybe I was just ready to receive the gifts of the water this summer. Maybe 43 was my magical number for really being able to drink in the lessons of the water. Whatever is was that enabled me to take it all in – my own wisdom or simply the expansiveness of a series of perfectly blissful days on the restorative lakes of Maine and New Hampshire – I am entirely grateful to the water and its offerings this summer.

Here is what it taught me:

Breathe with the waves, not against them

It sounds obvious, but if you’ve ever done an open water swim in really choppy water, you know what I’m talking about. Sometimes you turn your head to breathe and you get a lung full of water instead of air. Sure, you can muscle your way through and charge ahead – which is what I would have done if I were training. But this year, I let the water tell me what to do – I let it instruct me on how best to be with it. And surprise, surprise – it worked! Feeling the waves roll through my body as I swam, I could sense when I was up on the crest of the wave (and could breathe), and when I was in the trough (and need to keep my mouth shut and head down). I went to sleep many nights in August with that rhythm of the waves rocking me to sleep, as my inner ear continued to play out the movement on dry land. That’s when it hit me…I could heed the water’s instruction to me on dry land, too: breathe at the crest, rest at the trough, look up and get your bearings at the top, put your head down and trust at the bottom. It’s amazing how I effort less when I work with that rhythm. It just makes sense.

Orientation is everywhere if you just open your eyes

If I don’t have a kayaker with me to accompany me across the lake, my tendency is to pick a 200 meter stretch that’s close to shore and use this to do do “laps”. What’s key here is having a fixed bearing to orient myself (like a buoy or a dock) so that I make a direct line from here to there. That’s all well and good when it’s relatively calm, but when it gets choppy and the whitecaps pick up on the lake, it’s really difficult to keep them in your sights. At times I felt really distracted and disoriented – maddened, even – by this fact. Until I realized – duh! – that I could use the underwater bearings to orient me just as well. There is a whole landscape underwater- downed trees, distinctive rocks, even the occasional coke can – that be used to orient, much like lights that line a runway for planes. Once I realized I could use this secret underwater guidance system, I relaxed into the water and stopped fighting gravity so much. Again, I thought about the relevance to my life…where else was I missing information and guidance that was literally right under my nose waiting to be discovered? Where else was I struggling to keep my head above water, when the answers I needed were below it? I began to see where else I might get orientation – perhaps even relying on senses other than sight, tuning into sensations or sounds to guide me along the “right” path.

I’ve often joked that I have two speeds: really fast and stop. It’s a rather extreme way of living, and yes, I’ve crashed and burned many times as a result of stripping my gears trying to move from one to another – or worse yet, getting stuck in one. But I had it all wrong. The water taught me that. The rigor that comes when I move fast and focused isn’t mutually exclusive with the rest and ease that can come with stopping. When I was swimming longer distances this summer, I experimented with trying to relax AS I was swimming hard – to see if I could access that sweet spot of surrender and ease, at the same time I was exerting myself. It wasn’t immediate, that awareness of just how to do that, but I did find a way to hold them both in my body at once. I found the key was my breathe (duh!) and keeping it deep and even. I also found another clue in the length of my extension and in my willingness to allow for my glide between strokes to come to its fullest expression. I think it’s what my master’s swim  coach has been trying to teach me for years, but I finally got it – it’s about efficiency and not rushing my stroke. It’s about letting all the pieces of my stroke work for – and through – me. Having recently learned to row, I now see it is a similar lesson to leveraging both the “catch” and “release” of a stroke. It seems the are not mutually exclusive as I had once thought, but are two sides of the same coin.

The noise under the noise is so sweet

I am a night owl, often staying up way after everyone else in my family has drifted off to dreamland. It’s my special time, where I do my best thinking and dreaming and plan-hatching. Spending so much time by the water this August, I found myself drifting outside, drinking up all those private sounds that echo off the lake at night – the cry of the loons, the unseen water lapping gently against the dock, the spring peepers, and the occasional sound of laughter or the random piece of story from a nearby neighbors. We live in an extremely noisy society. I’ve always known this (and loved it, at times, being a relatively noisy person…), but this summer I was reminded of the sweetness that lies just below the noise. It’s invisible during the day, but it’s always there, patiently waiting for the noise to stop. So I made a promise to myself this August – to make sure I”m make more space for this underlying sweetness to emerge from the noise of mylife. Which means I need to shut up more. And shut down. And listen. Because it speaks to me in volumes, that sweetness, and I want more of it in my life. I even recorded a 20 second clip on my iphone of what it sounds like so I can have it remind me when I forget.

Storms are better observed than endured

Is there anything more spectacular than witnessing an awesome thunderstorm roll across a New Hampshire lake!? I marvel at it every time. But this year, it taught me something about storms. It offered me a new way to be with them: reverence. Growing up as a runner, I was trained to never let the weather stop you – to run in rain, ice, and yes, storms. But as a former waterfront director, I know all too well the protocol for storms on a lake: GET OUT OF THE WATER, find shelter, and wait for the storm to pass. Which it will. It always does. Watching the storms blow through those days in August, I thought about my relationship to them in the context of my life – did I resent them? Resist them? Nope. I endured them. What a waste! What have I missed as a result of “getting through” a storm – the spectacular displays, the majestic forces of nature at work, the sweetness of shelter… So this summer, I silent thanked the storms for their lesson. And I made a note to bring a bit more reverence to them in my travels beyond the lake.