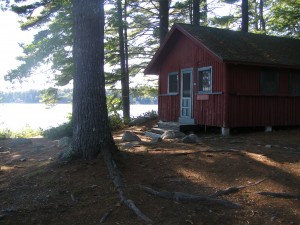 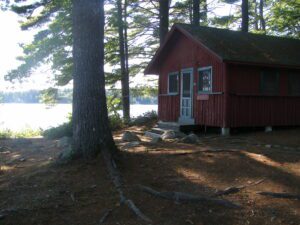 Last week I heard a phrase that resonated deeply with my soul. And in that moment, a large chunk of my life – both personally and professionally – went “click” and just fell perfectly into place.

I was listening to one of the women of my In Her Words writing experience read her selection for the week. She was sharing her most recent realization about her trip to her grandparent’s lake, and how it instantly connected her to her favorite parts of herself. Almost without her realizing it. Like magic.

“It’s possible to be raised by a place” , she concluded.

That’s when everything clicked into place for me and I had a moment of crystal clarity.

I was raised by a place, too.

Way back in the day (’85-’91 to be exact), I worked at an overnight summer camp on a beautiful lake in New Hampshire. I found my way to that camp out of sheer grit and determination. We didn’t have a lot of money back then. My single mom was doing her best to make ends meet, while at the same time managing to make life a marvelous adventure for “just us girls.” We were a rock-star team, my mom, my sister and I.

But when I was 15 I was craving an adventure. I had just moved to a new town and I was having trouble fitting in. I wanted a do-over. I wanted a fresh start where no one knew me. So when my mom was home sick one day from work, I rested the phone on her belly (considerate, eh?) and asked if she could find me and my best friend a job at a summer camp. I had heard tales of summer camps from my mom all my life, and was ready for some of my own. When I came home from school that day, my mom’s fever had broken and she proudly announced she had gotten us jobs that summer.

And that’s how I found my way home…to the place that raised me.

So what if my job was in the kitchen, scraping dishes and running the Hobart? So what if I smelled like rotten milk most of the day? I was 15 and was with my best friend in New Hampshire for the entire summer. That year turned out to be the beginning of an amazing seven-year stretch of magical time, in which I was a counselor, water front director, CIT (counselor in training) director and ultimately, girls’ camp director.

I became me in this place.

I discovered I was a leader. I was given immense responsibility and I watched in utter amazement as I rose to the occasion time and time again. I fell in love many times over those summers – with the place, with the sounds, with the smells, with my independence, with New England, and with a handful of sweet and saucy chocolate pie-eyed boys. This place taught me to believe in myself and to believe in the capacity of others. It taught me the power of community. It taught me what it feels like to truly belong and be part of something bigger than yourself.

Now if you’ve ever been to an overnight camp as a kid or if you’ve ever worked at one as a teenager or adult, you might know what I’m talking about. In reading this, you might have instantly been transported back to that place, and find yourself grinning ear to ear as you’re reading this. I don’t blame you one bit. It happens to me, too.

So it’s no wonder it still makes me smile with gratitude. This place raised me.

Years later, when I created SheChanges and was interested in offering an opportunity for women to come home to themselves, to remember who they are, and to tap back into the most powerful and nourishing parts of themselves, I though of camp and the place I was raised. In 2008, I offered my first women’s retreat, and I called it Homecoming. This women’s retreat of mine, held on a beautiful lake in Maine, is my love letter to my time at Camp Coniston. So whenever anyone asks me how I got the idea for my retreat, I smile and give a nod to the place that raised me.

Its spirit is alive in me. And at Homecoming.

Author’s note: Special thanks to the woman who so graciously granted me permission to use her phrase and share a bit of her story. You know who you ar