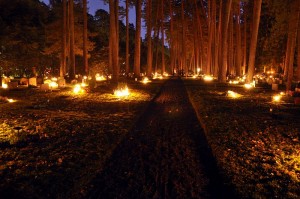 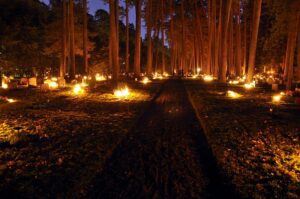 I’ve been thinking a lot about death these days.

It’s not a totally unusual experience for me, especially now. This is, after all, the “waning” time of year – the season of the crone – where we put our gardens to bed, give thanks for gifts received, and have the urge to gather our loved ones closer to home and hearth.

I’m also a Scorpio, and was born on November 1st – the day that falls smack dab between Halloween and  The Day of The Dead. Some refer to this day as All Saints Day, but that’s never really resonated with me (go figure).

So it’s no wonder I’m drawn to death…’cos baby, I was BORN this way.

Now, let me be clear, when I say “drawn to death”, I’m not talking about it in the morbid sense – the sort of commercialized version of death we are taught is something to be feared, or is associated with the occult. I didn’t go through a goth phase in high school, and don’t wear amulets filled with my beloved’s blood around my neck or anything (not that there’s anything wrong with that..Angelina is nothing to throw a stick at).

What draws me to death is a sense of reverence.

Death, to me, is a celebration of life. It’s also a celebration of the living, as anyone who has sat by a dying person’s bedside, or has attended a funeral or a memorial service will attest. The presence of death has you look hard at how present you are to being alive. It has you take stock, make decisions, and create change.

Being in the presence of death can change you – for the good.

I’ve always known I have an unusual capacity to be in the presence of death. Thankfully, it didn’t take me down the path of organized religion, but it did imbue my work in the world – all of it, from parenting to the work I do with women – with a deep sense of spirituality.

When I was five, I dressed in a nurse’s uniform and tended to my beloved grandfather as he died in his home from pancreatic cancer. I remember putting on skits and shows and telling him elaborate stories, feeling so blessed to have a captive audience. I now know I was acting in service of his process of death, bringing to it a celebration, a humanity, a joy. I remember crying at his funeral, but mostly because my loved ones were so stricken with grief it scared me.

When I was 28, I was asked to speak at my grandmother’s funeral. I was delighted and so proud to have been given such an honor. I remember worrying about how I was being perceived by the audience in this dire and dark Episcopalian church, as I laughed and swore and told stories of my grandmother’s mischievous adventures. That was one of my first experiences of breaking rank from “adult code”: it was clear I wasn’t appearing sad enough.

When I was 36, I gave birth to a son whom I knew would not survive. I was 20 weeks pregnant. That was the biggest test for me. Holding my own son and telling him it was okay to let go, that we loved him and would always hold him close to our hearts. I promised him we would be okay. That was surreal for me – one of those rare life moments, that changes you so significantly you feel like your DNA is actually altered by its impact.

Two years later, my sister-in-law, Grace, was in the final stages of dying from an aggressive form of breast cancer. She had outlived her initial prognosis of 18 months by nearly five and a half years. She was 45 – the age I will be turning in a few weeks. We had been supporting Grace in living – in “fighting”, truth be told – for a while as a family, so supporting her in dying was completely foreign to us.

In a moment of courage, I wrote to Grace and asked her if she’d like me to sit with her and help her to write letters to her children, then ages nine and five. I knew she was too weak to hold a pen, and I also know she had stuff to say – Grace always had stuff to say. It was something I knew I could offer her. She accepted, and we did write many letters, touching upon important topics and relaying all the pearls of wisdom her tired body could deliver in those last days of her life.

Most recently I stumbled on this TED Talk by Kelli Swazey that give us insight into one society’s belief that death is a gradual social process capable of knitting an entire community together. It got me thinking even more about the process of dying and the way we go about it in this country. I’m at the age when I’m starting to think about supporting my parents as they – and we – navigate this end-of-life rite of passage. Not to put too sharp a point on it, but I think we actually suck at it.

Not that we can be expected to be “good” at death, or anything. But better? Absolutely.

Here’s an example – and I’m sure this will kick up dander, as it challenges some religious beliefs: the expectation we have that families organize a funeral and a reception immediately after the person they love has died. I get the logistics of it. I understand the tradition and the value we hold dear in this society around “moving on.” We say it’s important to “give us closure”, but what if we want to stay “open” longer? Having seen this TED talk, I’m seriously questioning the pace with which we move through this important passage. It gives me anxiety just thinking about it, being expected to host a party I do not want following the death of my loved one, feeling compelled to assure people I’m okay (when I most likely won’t be) and assuage other people of their grief when I just want to bury myself deeply in my own. It just seems unfair, cruel even. Why not wait…even for a little bit? Kind of like couples who choose to go on their honeymoon six months after the actual wedding ceremony. 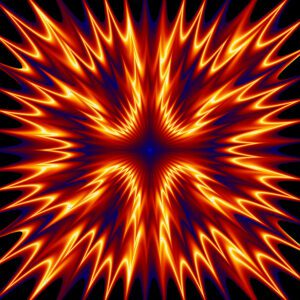 Kelli Swazey, in the TEDMed talk I mentioned above, gives us insight into a culture that does just that. And in giving us more time to acclimate to the loss of our loved one from this world, she believes – and I agree – that we bring a much needed reverence and integrity back into the process of dying, which, she asserts, greatly impacts our process of living.

Fast forward to today, and I am sitting on my bed in an inn on an island. I’m on retreat – my annual solo birthday retreat when I reflect on the past year and open the door to the next year of my life.

And what am I thinking about? Death.

But it makes sense, if you think about it. My retreat is all about bringing conscious closure to a year of my life, before crossing over the threshold to my next year. Not grieving (although some years I have done that…), but reflecting, appreciating, and celebrating me and my life. While I’m still alive.

By chance, I stumble on this TED talk by Amanda Bennett. She tells the story of her husband getting cancer and how they fought valiantly to defeat it, never giving up hope that they could win. She admits, she wouldn’t have done anything differently, but she asks to consider our narratives about saying goodbye. “We don’t have a heroic story for letting go“, she says, which is so true. Our story is limited to “fighting” or “giving up”, but what if neither of those is appealing?

I want a new story for the process of dying. I want to re-brand death.

Without it, I truly believe the quality of our lives will suffer. We have riches to mine in allowing death to take a seat of honor among the living. Fear and haste hasn’t served us well, but our love of a heroic ending just might. What if we could design a story that allowed for a noble path to dying in our society, as Amanda Bennett suggests? What if our narrative of death made space for both “a valiant battle and eventually a graceful defeat”?

Imagine how that might alter our process of living, let alone dying – if fear and haste were replaced with reverence and presence?

Note: This post is dedicated to my client (you know who you are) who shares my passion for bringing more ritual and ceremony to end-of-life transitions. Rock on.